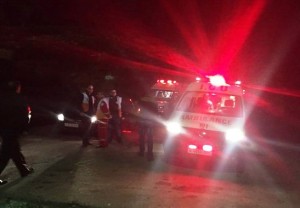 The bodies of Raed Jaradat, 22, and Mahmoud Ghneimat, 20, were delivered to the liaison department and then to their families, the sources said.

Both of the human animals are from Chevron and were killed as they carried out stabbing attacks.

Their terrorists’ bodies should have left to rot, but Israeli authorities on Shabbos agreed to release the bodies of at least seven Palestinians being held by Israel following a joint funeral of five others whose bodies Israel had released on Friday.

Palestinian sources say that Israel retracted the decision to release all seven bodies and instead only released the two at this time.

Jaradat, from the village of Sair east of Chevron, was shot dead on Oct. 26 after he stabbed and injured a 19-year-old Israeli soldier in the neck.

Ghneimat, from the village of Surif west of Chevron, was shot dead on Oct. 22 after he attempted a stabbing attack.

The sources said Israel stipulated that the two terrorists should be buried at night in order to avoid a large, politically charged funeral, but the Palestinian families refused that stipulation, insisting on “decent funerals.”

The joint funeral is expected to take place today.

Israel’s security cabinet decided earlier last month that the bodies of Palestinian terrorists shot dead after carrying out attacks on Israeli citizens would no longer be returned to their families.

Palestinian terrorists killed by Israel are considered “martyrs” in Palestinian society and are highly respected. Their funerals tend to be politically charged.