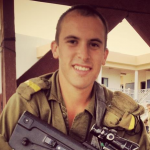 Israeli Prime Minister Bibi Netanyahu made a public statement at the Defense Ministry in Tel Aviv on Sunday night, following the deaths of the 13 Israeli soldiers of the Golani brigade who were killed since last night fighting in Gaza during heavy combat with Hamas terrorists in Gaza.

“The heart of the entire nation is with the families of the fallen. We feel your pain. We bow our head to your sons who fell so that we can continue living here. On behalf of the Government and the entire People of Israel, I would like to express the deep pain that we feel,” said Prime Minister Netanyahu.

Of the 13 soldiers, two were U.S. citizens; Sean Carmeli with dual U.S.-Israeli citizenship of South Padre Island, Texas and Max Steinberg of Los Angeles, California. The two were part of a team of seven Israeli soldiers, who were all killed when an explosive device reportedly detonated on their armored vehicle according to the official IDF blog. In the second incident, terrorists opened fire at two IDF soldiers in the northern Gaza Strip, killing one soldier while the second returned fire. Later, two IDF soldiers were killed in an attack by a terrorist squad in northern Gaza and three IDF soldiers lost their lives trapped in a burning building.

“At the outset we knew, and I also said, that this could be a long campaign but from the history of our people we know a simple truth – the eternal people do not fear a long road. We are proud of our heroic soldiers. With the Almighty’s help, and theirs, we will succeed,” said the Israeli prime minister on Sunday evening, July 20.

More information about Sean Carmeli and Max Steinberg was given by The Michael Levin Lone Soldier Center, an organization that assists lone soldiers throughout their IDF Service. Founded by a group of former lone soldiers who came to Israel on their own to serve in the IDF, the center is named after Michael Levin, an Israeli paratrooper originally from Pennsylvania who was killed in the Second Lebanon War in 2006.

According to the center’s post, Sean Carmeli was a returning citizen who came from a small town in Texas. “Everything may be bigger in Texas, but the beaches and parties could not distract a native-son from returning home to defend and protect his people…” the center posted on its Facebook page in honor of Carmeli’s memory.

Steinberg came “from a proud Zionist home” in LA and “did everything he could to stand up and fight for what was right,” the post continued.

“They made the ultimate sacrifice, in an attempt to rid the world of one of the most evil, unimaginable and horrible organizations to ever exist,” the post concluded.