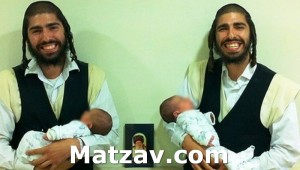 This may be a first in the world, the type of occurrence recorded by Guinness Book of World Records: Twin brothers married to twin sisters had daughters within 20 minutes of each other.

The story began several years ago, when twin brothers, Niv and Ran Cohen, from a Breslover family joined the yeshiva of Mohorosh, Rav Eliezer Shlomo Shick zt”l, in Yavniel. At a certain point, Rav Shick told the brothers that he has excellent shidduchim for them both. Rav Shick redd twin sisters to these two outstanding bochurim. The twins brothers married the twin sisters, with their weddings just four days apart from each other.

The families of the couples relate that at the time, Rav Shick told the mother of the twin girls that she would be a grandmother “bevas achas (at one time).” At the time, she didn’t understand this cryptic comment. “I did not understand what the rov meant,” she said. “Only now do I understand. When the rov told this to me, no one yet knew that both of my daughters were expecting.”

As it turns out, the twins both gave birth at Laniado Hospital in Netanya 20 minutes apart. The doctors and nurses at the hospital were buzzing with excitement. Most remarked that they had never before seen such a thing: twin mothers, married to twin brothers, giving birth just minutes apart.

A somewhat similar case took place in 2013, when twin girls from the United States married twin boys and then one of the girls gave birth to twin boys.

“Boruch Hashem, in the zechus of the brachah of the tzaddik of Yavniel, my brother and I, along with our wives, are celebrating the birth of our firstborn daughters,” said one of the fathers. “It was an open miracle. Nothing like this had ever happened before. We went to Laniado Hospital, because the rov zt”l (Rav Shick) wanted us to come here because the Sanzer Rebbe built the hospital with such mesirus nefesh.”

The two mothers will be released from the hospital in the coming days.