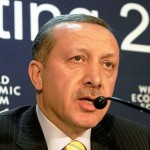 Turkish Prime Minister Recep Tayyip Erdogan agreed to return the “Profile of Courage” award he had received from the American Jewish Congress in 2004 for working to help bring peace to the Middle East and his commitment to protect the Jewish community in Turkey.

The American Jewish Congress demanded the return of the award over Erdogan’s recent comments regarding Israel’s current conflict with Hamas in Gaza. Erdogan, who is campaigning for re-election, said that Israel has “surpassed Hitler in barbarism.”

Turkey’s ambassador to the U.S., Serdar Kilic, wrote to the Jewish group in a letter revealed Tuesday by the Associated Press that Erdogan would be happy to return the award because of “the regrettable stance adopted by the present leadership of the American Jewish Congress vis-a-vis the recent attacks on the innocent civilians in Gaza.”

Though violent riots over the Israel-Gaza conflict broke out earlier this month on the streets of Turkey, targeting both the Israeli Embassy in Ankara and the Israeli Consulate in Istanbul, Erdogan denied that his country has become a hostile place for Jews, telling the Daily Sabah that “Jews in Turkey are our citizens. We are responsible for their security of life and property.” But a Turkish-Jewish activist told The Algemeiner that Erdogan’s government has turned a blind eye to anti-Semitism, putting the Turkish-Jewish community “in grave danger for their lives after the escalation of the events in the Middle East.”