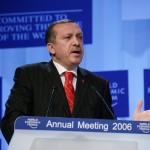 Turkish President Recep Tayyip Erdogan told an Israeli radio station that he believes it is possible to repair frayed relations between Turkey and Israel.

Erdogan’s made the remark during the U.N. climate change conference in Paris, Kol Yisrael radio reported. Turkish-Israeli relations broke down following the 2010 Gaza flotilla incident, in which the Israel Defense Forces boarded the Turkish Mavi Marmara vessel, which was attempting to break the blockade of Gaza. After Turkish militants attacked Israeli commandoes who boarded the ship, nine Turkish citizens were killed in clashes. In 2013, at the request of U.S. President Barack Obama, Israeli Prime Minister Benjamin Netanyahu apologized to Erdogan for the flotilla incident over the phone.

Erdogan has been known for his anti-Israel and anti-Semitic rhetoric over the years. He recently called the current terror wave against Israelis a “noble fight” by the Palestinians.