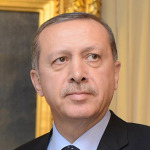 Turkish President Recep Tayyip Erdogan, who is seeking to increase the powers of his office, cited Adolf Hitler’s Nazi Germany as an example of an “effective” presidential system.

“There are already examples in the world. You can see it when you look at Hitler’s Germany,” Erdogan told reporters on a return trip from Saudi Arabia, Reuters reported.

“There are later examples in various other countries,” he added.

Erdogan, who has a history of making anti-Semitic and anti-Israel statements, is attempting to revamp Turkey’s constitution by moving the presidency away from a largely ceremonial role to a strong chief executive, like the presidencies of the United State or France. Many in Turkey fear that Erdogan is seeking to consolidate more power for himself and his Islamist AKP party.

In June, the AKP failed to gain a majority in parliamentary elections, but after another election in November, the party secure a majority, paving the way for Erdogan to make constitutional changes.

Despite Erdogan’s latest remarks and past tension with Israel, Turkey and Israel are reportedly close to normalizing diplomatic relations. But differences remain over Gaza, which is ruled by the Palestinian terror group Hamas. Turkey wants Israel to lift its blockade of the coastal territory.