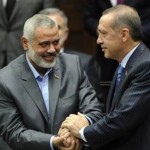 “For energy projects to proceed, the human tragedy in Gaza will have to be stopped and Israel will have to instate a permanent peace there with all elements,” Yildiz told reporters in Ankara, referring to the recent counter-terror Operation Protective Edge.

“It is out of the question to proceed on any energy project unless a permanent peace is established, with contribution from all sides and with necessary conditions. A human tragedy unfolded (in Gaza), it is all too easily forgotten,” added Yildiz.

Yildiz’s comments came in response to questions about a proposed lucrative joint project, which would have a 10 billion cubic meter sub-sea pipeline built by 2023, connecting Israel to the European market. The project was expected to cost $2.2 billion, reports Reuters.

The pipeline was meant to help Israel export the estimated 18.9 trillion cubic feet of natural gas at its Leviathan offshore field; the field has been hailed as the largest gas deposit found in the world in a decade. Prime Minister Binyamin Netanyahu has forecast $60 billion in revenues on Israel’s offshore gas exports.