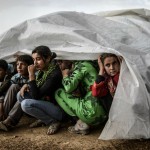 The Turkish government was granted new powers today to launch military operations in Syria and Iraq and to allow foreign countries to use Turkish land for possible operations against ISIS. Turkey’s parliament approved the motion 298-98, though the nation has not yet decided what role it wants to play in the U.S.-led coalition against ISIS.

When asked what Turkey’s next step would be, Defense Minister Ismet Yilmaz said “don’t expect any immediate steps.”

Around 160,000 Kurdish refugees have fled across the Syrian border into Turkey as ISIS has continued its attack on the key border town of Kobani. Read more at ABC News.