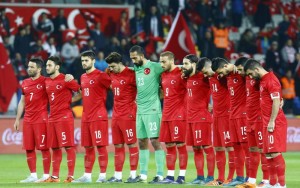 Turkish soccer fans reportedly booed during the moment of silence for the victims of the Paris attacks before their team played Greece in a friendly game on Tuesday.

Soccer matches across Europe paid tribute to the victims of the attacks, including at England’s game against France at Wembley, where the entire stadium sang along to “La Marseillaise,” the French national anthem, waved the French flag, and held a moment of silence.

Turkish Prime Minister Ahmet Davutoglu and his Greek counterpart Alexis Tsipras watched the game together as a symbol of reconciliation between the hostile neighboring countries.

The match, which drew 0-0, was the first time the two teams had met for eight years. Read more.