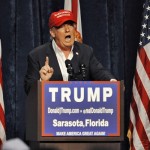 Republican presidential candidate Donald Trump on Saturday reframed his claim that he saw Muslims in Jersey City, New Jersey, cheering the attacks on the Twin Towers of the World Trade Center in Manhattan on Sept. 11, 2001 by asserting the sentiment was shared worldwide.

“Worldwide, the Muslims were absolutely going wild,” the real estate mogul said at a campaign rally in Sarasota, Florida.

Trump came under fire a week ago for saying at another rally and in a nationally televised appearance that he watched thousands of people in Jersey City cheer the World Trade Center’s implosion. Fact checkers debunked his claim.

Controversial remarks may be taking a toll on Trump, who has seen his support in Reuters/Ipsos opinion polling of Republican voters nationally take a sharp downturn in the past week. In the past five days, he dropped 12 points from 43 percent to 31 percent, although he continues to hold a wide lead over his competitors. Read more here.