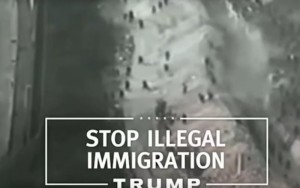 Donald Trump’s first campaign TV ad has one small problem: the border footage they use to portray the ills of “illegal immigration” in the United States in fact shows people rushing over a border in Morocco, according to Politifact.

The footage, which shows people streaming over a fence, is from the Italian television network RepubblicaTV.

“No…it’s not the Mexican border, but that’s what our country is going to look like if we don’t do anything,” Trump’s campaign manager told NBC in response to the fact-check. Read more at Politifact.

WATCH THE AD BELOW