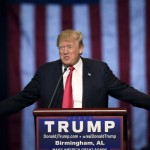 Donald Trump said he would bring back waterboarding during an interview on ABC’s This Week. George Stephanopolous suggested the idea during the interview initially and later pressed him asking, “So you’d bring back waterboarding?” “We have — I would bring it back, yes. I would bring it back,” Trump said. “I think waterboarding is peanuts compared to what they’d do to us, what they’re doing to us, what they did to James Foley when they chopped off his head. That’s a whole different level and I would absolutely bring back interrogation and strong interrogation.” Read more at ABC News.