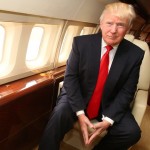 Donald Trump and Pope Francis tied for second in 2015’s most admired man in the world poll, falling behind only President Obama in a Gallup survey released Monday.

Behind Clinton, Americans named 2014 Nobel Peace Prize recipient Malala Yousafzai with 5 percent, followed by Oprah Winfrey and first lady Michelle Obama with 4 percent. Obama earned 17 percent on the men’s side, his eighth time atop the list. Read more at Politico.