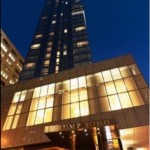 Luxury hotel condominium Trump Soho is being sued for serving a non-kosher sandwich to an Orthodox Jew and pretending it was kosher, the New York Post reported.

According to the lawsuit, Upper West Side resident Dan Miller paid $146 for a hot kosher meal but was instead given a cold non-kosher turkey sandwich. The hotel then “created an elaborate hoax” to deceive him and cover up their mistake, he said in his lawsuit.

As he waited for his specially ordered lunch at a business conference at the hotel, he reminded the staff that his food needs to be double wrapped until it is delivered, as per kosher laws. An employee responded, “Yes, of course, we are very familiar with the kosher rules, we do it all the time.”

When the cold turkey sandwich arrived in a single piece of Saran wrap, Miller was suspicious as it was not correctly wrapped according to Jewish law and had no kosher seal, which is customary of kosher food served on planes and at other public venues. The server reassured him the food was fine for him to eat but Miller, the son of a rabbi, said he was still skeptical.

Other employees assured Miller that the lunch was purchased at the kosher Noah’s Ark restaurant located on Grand Street, the suit says.

When the Yeshiva University graduate began to eat the sandwich, he noticed that it didn’t taste like food he had previously eaten at Noah’s Ark. He proceeded to call the Grand Street establishment, which informed him that they had not made any deliveries to Trump Soho that day. Miller also e-mailed a photo of the sandwich to Noah’s Ark and workers confirmed the meal was not from their eatery.

Although the hotel chef promised to send Miller a copy of the Noah’s Ark receipt the next day, a Trump Soho food and beverage manager finally admitted that the food wasn’t kosher and was made in the hotel’s kitchen because the establishment forgot to order the special meal.

“The hotel staff panicked and inappropriately responded by serving him a non-kosher meal that was made to appear kosher,” the suit says.

Miller is “furious” about the lies that caused him to commit “a serious violation of Jewish law – consuming non-kosher meat,” his suit states. He is also concerned that the bread was dairy, which violates another Jewish dietary law of not mixing meat and dairy.

“It is simply inconceivable for any orthodox Jew, like Dan Miller, to eat a non-kosher meat sandwich,” Miller says in his suit. He blames Trump Soho for not properly training its staff about kosher laws and he is suing for unspecified damages.

Representatives for Trump Soho have not commented on the lawsuit, according to the New York Post.