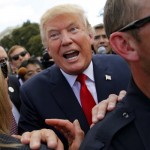 The world would be a better place if dictators such as Saddam Hussein and Moamer Kadhafi were still in power, top Republican US presidential hopeful Donald Trump said in comments aired Sunday.

The billionaire real estate tycoon also told CNN’s “State of the Union” talk show that the Middle East “blew up” around US President Barack Obama and former secretary of state Hillary Clinton, his biggest Democratic rival in the race for the White House.

“100 percent,” Trump said when asked if the world would be better off with Saddam and Kadhafi still at the helm in Iraq and Libya.

Both strongmen committed atrocities against their own people and are now dead. Saddam, the former Iraqi president, was toppled in the 2003 US-led invasion of Iraq and was executed in 2006.

Kadhafi — who ruled Libya for four decades — was ousted and slain in October 2011 amid a NATO-backed uprising.

“People are getting their heads chopped off. They’re being drowned. Right now it’s far worse than ever under Saddam Hussein or Kadhafi,” Trump said.

Calling Iraq the “Harvard of terrorism,” Trump said the country had turned into a “training ground for terrorists.”

“If you look at Iraq from years ago, I’m not saying he (Saddam) was a nice guy. He was a horrible guy but it’s better than it is now,” Trump said.