A man arrested by the FBI in connection with bomb threats made against Jewish community centers across the country is an anti-Trump leftist who recently converted to Islam.

Juan Thompson, 31, was arrested in St. Louis by the FBI for making at least eight bomb threats and the cyberstalking of” an ex-partner, reports the Daily Caller.

“The criminal complaint states that threats made to the Jewish establishments across the country by Thompson were under his name…and occurred after the relationship ended. The threats were made by both email and phone calls.”

Although his motivation was to frame his ex-partner, it’s likely that Thompson also made the threats in order to make Trump look bad by relying on the media to insinuate the threats were being made by Trump supporters.

Trump was criticized when he said of the bomb threats, “Sometimes it’s the reverse, to make people — or to make others — look bad,” but it appears as though he was entirely correct.

Thompson’s Twitter account is full of anti-Trump sentiment, as well as pro-Communist sympathies. He tweeted that he voted for Bernie Sanders and had recently “reverted to Islam”.

Thompson also tweeted that Trump “is Hitler” and criticized his immigration policy.

“And ppl says Jews don’t face bigotry and violence. How would you feel if nasty white ppl destroyed MLK’s gravesite?” Thompson tweeted, while himself being behind the threats.

He was also a supporter of ‘Black Lives Matter’ and thought the Ferguson riots were justified.

Here’s a fun column by the Jewish center bomb-threatener: “WHY THE FERGUSON RIOTS WERE JUSTIFIED” http://bit.ly/2lCZvdW

“No Justice, No Respect”: Why the Ferguson Riots Were Justified

When the St. Louis County Prosecutor, during a bizarre press conference, announced the decision not to indict Darren Wilson, I was standing 10 feet away from Michael Brown’s mother, Lesley McSpadden.

Thompson also made clear his racism and hatred for white people. 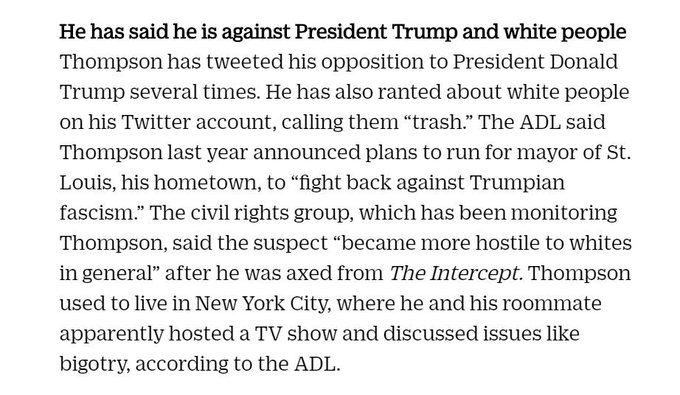 He also retweeted someone else’s criticism of yours truly.

The guy they arrested for the bomb threats against Jews retweeted someone’s criticism of me. Great to be loathed by such scumbags.

Thompson was also fired from The Intercept for making up fake news stories.

The Intercept recently ran a headline blaming Trump’s allies for the bomb threats. Oh the irony.

The left has insinuated for weeks that Donald Trump and his supporters were to blame for the bomb threats against Jewish community centers. It now turns out that a left-wing anti-Trump journalist was responsible for the threats.