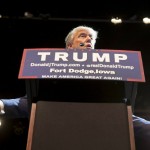 During a campaign speech at the Decker Auditorium of Fort Dodge, Iowa, frontrunner Donald Trump elaborated on his plan for dealing with the so-called Islamic State: “Bomb the [garbage] outta them.”

The remark came as the business mogul lamented how, upon first entering the presidential race, media outlets repeatedly pressed him to reveal his self-described “secret plan” for dealing with ISIS. “I’d just bomb those suckers,” he continued. “I’d blow up the pipes, I’d blow up the refineries, I’d blow up every single inch, there would be nothing left.”