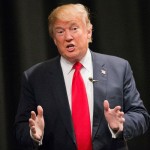 Republican presidential front-runner Donald Trump isn’t backing down in the face of criticism within his own party over his suggestion that all Muslims should be banned from entering the United States until the country can get a grip on Islamic terrorism.

“It’s short-term,” Trump said of the ban when asked by Barbara Walters in a interview shown Tuesday on ABC’s “World News Tonight.”

Walters asked Trump if he regrets having made the suggestion.

“Not at all,” he said. “We have to do the right thing. Somebody in this country has to say what’s right.”

Trump said he doesn’t buy into fears his idea will cause problems with Muslims in the United States, adding that his own friends who are Muslims agree with him “100 percent.”

“They [terrorists] knocked down the World Trade Center – they tried doing it twice,” Trump said. “Other things have happened. … There are people that have tremendously bad intentions. We have to be tough, we have to be smart and we have to be vigilant.

“I’m the worst thing that ever happened to ISIS,” he added. “The people in my party fully understand that.”

As for his Republican critics, Trump said, “They’re running against me. For the most part, they have no poll numbers. I’m leading by a lot. They get it. They’re trying to get publicity for themselves.

“You know when I came out against illegal immigration, everybody said the same thing. Two weeks later, everybody was on my side, including the members of my own party.”