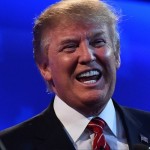 Republican presidential frontrunner Donald Trump has finally agreed to disclose his medical history. On Twitter he boasted that his health was perfect.

Campaign staffers had been under fire for the real-estate mogul’s refusal to release the records, as is customary for White House aspirants.

Trump has previously admitted to a poor diet heavy on steak and bacon, fitful sleep, and lack of regular exercise.

Hillary Clinton, Jeb Bush, and Chris Christie have all issued their own records in recent months.

If elected next November, Trump, at 70, would be the oldest person to ascend to the presidency. Read more at Politico.