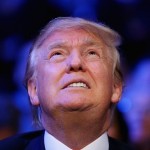 Republican presidential candidate Donald Trump said Sunday he expected backlash to his plan to temporarily ban foreign Muslims from entering the U.S. but argued the extreme members of the religion who support terrorism are “sick people” who pose a risk to the country.

“I knew there would be a storm,” the front-running Trump told “Fox News Sunday,” in an intreview taped Friday.

Trump proposed the ban in the aftermath of several recent terror strikes in which the attackers had apparent connections to extremist groups, including the Islamic State, or ISIS.

The female attacker in the deadly San Bernardino, Calif., shootings was allowed to enter the United States from Pakistan on a fiancée visa, despite having publicly stated her desire to commit jihad.

“They’re sick people,” Trump said Sunday. “There are a group of people who are a risk.”

His plan was widely criticized by Democrats and Republicans, among them his 2016 White House rivals and GOP House Speaker Rep. Paul Ryan, who have suggested Trump’s proposal is un-American.

Trump on Sunday criticized Ryan’s thinking and said Ryan supports amnesty, which means allowing illegal immigrants to stay in the U.S. without a penalty.

“He’s big on amnesty,” Trump said. “That’s not the kind of thinking we need. We need strong leaders.”

Despite the outcry from the Washington establishment, Trump has at least maintained or increased his lead in public polls, including a Monmouth University survey released last week that shows him with 35 percent of the vote among GOP candidates.

Trump, whose campaign has been highlighted by a series of controversial remarks, on Sunday also expressed confidence again that he would at least win the GOP nomination and again hinted at an independent run should his party try to maneuver him out of the race.

“We’ll see whether I’m going to be treated fairly,” he said. “I understand what they’re going through. … I was supposed to be writing checks. … I’m going to win.”