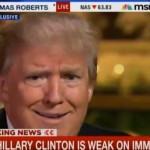 When Katy Tur stumbled over a question about immigration and crime, Trump cut her off and said, “Come on, try getting it out.” Trump continued: “Don’t be naïve. You’re a very naïve person,” he told her when she referred to the Pew Research Center as an independent source.

He then followed up by telling her, “I mean, I don’t know if you’re going to put this on television, but you don’t know what you’re talking about.”

Trump stuck to his guns on immigration and bashed Hillary Clinton as the “worst [secretary of state] in the history of the United States.”