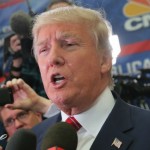 Donald Trump ranks first in the last poll determining the lineup of the GOP’s next main stage presidential debate.

The real estate mogul, with 26 percent support, has a 3-point lead over former neurosurgeon Ben Carson, according to the Fox News survey.

Sens. Ted Cruz (Texas) and Marco Rubio (Fla.) are tied for third place, with 11 percent each.

The fourth GOP presidential debate is scheduled for Nov. 10 in Milwaukee and will air on the Fox Business Network.

Wednesday’s results are the last the channel is likely including in determining candidate ranking. It has previously said candidates must clear a 2.5 percent average for inclusion on the event’s main stage.

Christie risks missing the prime-time contest, with only 2 percent support nationwide, according to the latest RealClearPolitics average of polls.

Paul and Huckabee, meanwhile, are likely safe given they have 2.8 percent and 2.6 percent, respectively.

All three men’s inclusion, however, will be determined by which four samplings Fox Business Network selects as its qualifiers.

The network said it is announcing its official undercard and main stage lineups on “Lou Dobbs Tonight” Thursday evening, according to CNN Money.