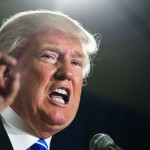 Donald Trump, the billionaire real estate developer who is whipping up a storm in the 2016 presidential election, told a crowd of police officers in New Hampshire on Thursday night that he was starting to win the debate about cutting off all Muslim immigration into the US.

As the fall-out continues from his highly contentious proposal to close the country to all incoming Muslims for a temporary period in the wake of the San Bernardino terrorist attack, Trump audaciously claimed that the nation was starting to swing behind him. “We have people talking, I’ll tell you that,” the Republican frontrunner said, “and they’re talking very positively.”

He described the worldwide furor that was provoked by his call on Monday for a “total and complete shutdown” of US borders to Muslims as “an interesting few days.” But the public was beginning to agree with him, he said, just as they had done over his earlier contentious plan to build a wall along the Mexican border.

“They are saying ‘Trump is right. Trump has a point.’”

The Republican frontrunner made his remarks at the Sheraton hotel in Portsmouth, New Hampshire, where the New England Police Benevolent Association was voting to endorse him as its presidential candidate. After he received the endorsement from the police union, Trump promised that he would “never, ever let the police and law enforcement in this country down”.

Trump’s contention that he was beginning to win the debate on Muslim immigration was to some extent supported by a new poll from NBC News and the Wall Street Journal. It suggested that more Republicans favor his proposal to ban all Muslims from entering the US than oppose it.

According to the poll, 42% of Republican voters support the presidential candidate’s plan while 36% oppose it. When only Republican primary voters are included, support falls to 38% supporting and 39% opposing the plan.

Yet while more Republican voters seem comfortable with Trump’s controversial proposal, it is still fiercely opposed by most Americans. Fifty-seven percent of all respondents across party lines oppose Trump’s plan to bar Muslims from entering the United States and only 25% support it.

The poll is not the first to find widespread GOP support for Trump’s advocacy of imposing a religious test for anyone entering the United States. An online poll conducted by Bloomberg Politics on Wednesday found that 65% of likely Republican primary voters supported Trump’s plan.

Trump has also improved his standing in national polls since calling for the ban. In a new poll from the New York Times and CBS News released on Thursday, the real estate mogul received support from 35% of Republican primary voters nationally.

Read more at THE GUARDIAN.