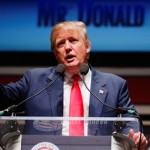 Donald Trump said in an interview published Thursday by The Associated Press that if he is elected president, he would know in six months whether or not his administration could achieve an Israeli-Palestinian peace deal.

“If I win, I’ll let you know six months from the time I take office,” Trump said.

“I have a real question as to whether or not both sides want to make it,” said the Republican contender and billionaire real estate mogul, noting that he has more concern about the Palestinian side’s intentions.

Trump added that he understands if Israel is unwilling to make the sacrifices needed to bring about an agreement.

“A lot will have to do with Israel and whether or not Israel wants to make the deal—whether or not Israel’s willing to sacrifice certain things,” Trump told The Associated Press. “They may not be, and I understand that, and I’m OK with that. But then you’re just not going to have a deal.”

In an interview with JNS.org earlier this year, Trump said he was “not exactly thrilled” by the U.S. government’s current funding of the Palestinian Authority to the tune of $500 million per year.

“It’s obvious. We have to help people that respect us, that want things to be done and properly done. Not just there (the Palestinian Authority), we’re giving money to all sorts of groups and people and countries that take advantage of the United States, so it’s something that I’m not thrilled about,” Trump said at the time.