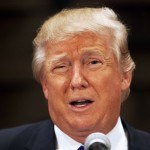 Donald Trump told Fox Business Network host Stuart Varney on Tuesday that he would “absolutely” consider controversial measures to fight ISIS in the United States – including the suspension of particular passports and the closing of mosques.

Citing England’s adoption of those anti-ISIS measures, Varney said, “They’ve got a whole new series of proposals to deal with this, including withdrawal of passports from some of these people.”

“…and closing some mosques,” Varney added. “Would you do the same thing in America?”

“I would do that,” the Republican frontrunner added. “Absolutely, I think it’s great.” Read more at Mediaite.