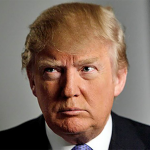 Donald Trump is warning Hillary Clinton against playing “the war on women” card in the latest attack on the Democratic presidential front-runner, calling her campaign tactics “pathetic.”

At Clinton’s rally at a Keota, Iowa, school on Tuesday, the former secretary of state got a question from a fifth-grader who asked what Clinton would do about bullying, the Des Moines Register reports.

The girl confessed she’d been bullied because of her asthma.

“I think we all need to be aware of the pain and real anguish bullying can cause,” Clinton said after giving the child a hug, the Register reports. “I don’t think a lot of people who do it really understand how it makes other people feel.”

She then took sharp aim at Trump.

Clinton has been stepping up her attacks on Trump as she zeroes in on a general election in which she appears to be confident she’ll be the party’s standard-bearer.

Yet Clinton also appears acutely aware the GOP has hit a nerve with an American public that is feeling insecure, frequently telling voters “It’s OK to be afraid.”

Meanwhile, Trump is bolstering his defense of remarks aimed at Clinton that have been criticized as vulgar, including his use of a Yiddish term to describe Clinton’s 2008 primary loss to Obama.

In an interview Tuesday with the Register, Clinton blasted back: “I don’t know that he has any boundaries at all. His bigotry, his bluster, his bullying have become his campaign.”