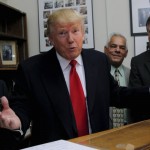 During a South Carolina campaign event, Trump defended his unsubstantiated claim that thousands of Muslims were cheering on the 9/11 attacks in New Jersey and imitated investigative reporter Serge Kovaleski. He appearing to mock his disability as he flailed his arms.

“I merely mimicked what I thought would be a flustered reporter trying to get out of a statement he made long ago,” Trump said.

The real estate mogul added that he had no idea that Kovaleski was handicapped because he didn’t know what he looks like. Trump later accused Kovaleski of “using his disability to grandstand.” Read more at the Guardian.