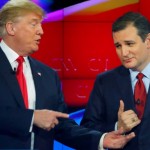 Donald Trump is back on the birther beat. During a Tuesday interview, the Republican frontrunner suggested rival candidate Ted Cruz’s Canadian birth could prove to be a “very precarious” issue should he become the party’s nominee.

“Republicans are going to have to ask themselves the question: ‘Do we want a candidate who could be tied up in court for two years?’ That’d be a big problem,” Trump told The Washington Post. “It’d be a very precarious one for Republicans because he’d be running and the courts may take a long time to make decision. You don’t want to be running and have that kind of thing over your head.”

He added: “A lot of people are talking about it and I know that even some states are looking at it very strongly, the fact that he was born in Canada and he has had a double passport.” Read more at The Washington Post.