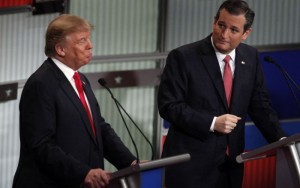 Donald Trump and Ted Cruz battled memorably Thursday over Cruz’s birthplace and the values of Trump’s hometown as the two GOP presidential front-runners fought for leverage weeks before the Iowa caucuses.

Cruz has until recently made a show of embracing Trump while allowing his rivals to fall in their attempts to take down the billionaire.

But having slipped out of the lead in recent Iowa polls and with Trump steering constitutional lawyers and the media into a damaging conversation about whether he is a natural born citizen — a qualification for president — Cruz made a strategic decision to attack Trump during the party’s sixth primary debate, in North Charleston, S.C.

Cruz’s new strategy led to exchanges between the two that became so intense and personal that the other candidates on stage were, at times, forced to simply stand by and watch.

“I’ve spent my entire life defending the Constitution before the U.S. Supreme Court, and I’ll tell you, I’m not going to be taking legal advice from Donald Trump,” said Cruz, a graduate of Harvard Law.

Addressing Cruz, Trump told his rival that if he were the nominee, he would face lawsuits. If Trump ran with Cruz as his vice presidential pick, he said, they would have to fight legal action from Democrats.

Cruz said he thought all Americans knew what he meant by the term.

Cruz elaborated that New York tends to be a liberal, “pro-abortion … pro gay marriage” city that was focused on money and the media. Cruz then brought up a 1999 interview Trump did with late “Meet The Press” host Tim Russert, during which Trump expressed liberal views including being “very pro-choice.”

“Not a lot of conservatives come out of Manhattan, I’m just saying,” Cruz said, playing on a one of Trump’s favorite lines, when the billionaire tries to raise doubts about Cruz among Christian audiences by saying that “not too many evangelicals come out of Cuba.”

But instead of delivering a bombastic response, Trump quieted his tone and gave perhaps his best-received reply of the night. In quiet indignation, Trump invoked 9/11 to rebut Cruz.

“When the World Trade Center came down, I saw something that no place on Earth could have handled more beautifully, more humanely than New York,” Trump said.

The billionaire’s response was so well-received by the crowd that even Cruz was forced to clap.

“I have to tell you, that was a very insulting statement that Ted made,” Trump said as Cruz smiled awkwardly.

Trump wasn’t the only candidate hitting Cruz, who has come under increasingly tough scrutiny as he has risen to second in national polls and, briefly, to first in Iowa.

At one stage, Florida Sen. Marco Rubio – who has been sparring with Cruz for weeks, particularly over immigration, listed every issue on which he accuses Cruz of “flipping.” He said that Cruz had been on both sides of trade promotion authority, his appraisal of NSA leaker Edward Snowden, ethanol subsidies and illegal immigration.

Cruz also faced tough questions from the moderators, but he was prepared for a question about an unreported 2012 campaign loan from Goldman Sachs that was featured in a story on the front page of The New York Times the day of the debate.

He turned his fire on the newspaper, a reliable target for conservatives. And to cheers, he described how the Times, and particularly one of its columnists — Frank Bruni, though Cruz did not name him — had it in for him.

With Cruz and Trump dominating the debate, there was little room for the establishment candidates on the stage to distinguish themselves.

Rubio, Former Florida Gov. Jeb Bush, New Jersey Gov. Chris Christie and Ohio Gov. John Kasich were relatively civil toward each other with only a few breakout moments, most notably between Christie and Rubio, who have been attacking each other’s records and experience during the week leading into the debate.

Rubio was asked about an advertisement by his super-PAC, which portrayed Christie as a liberal with views similar to President Obama’s. In response, Florida senator piled on the characterization while Christie, standing beside him, glowered.

Christie responded by reminding Rubio of his noted moment in the October debate in Boulder, Colo., in which he lectured Bush for going against his instincts and following his advisers in attacking Rubio.

“It appears that the same someone’s been whispering in Marco’s ear,” Christie said. “The difference between being a governor and being a senator,” he added, was that while senators “talk and talk,” when you’re a governor, “you’re held accountable for everything that you do.”

Later, the argument between the establishment rivals escalated further over the question of entitlements. As Rubio and Cruz avoided the question, debating instead their tax policies, Christie took the opportunity to interject and painted himself as the grown-up governor who answers the question.

Rubio tried to speak, but Christie stopped him. “You had your chance, Marco, you blew it,” Christie said.

Of the other establishment contenders, Kasich had no breakout moments, but Bush received a warmer reception by being the only candidate on stage to make an aggressive case against Trump’s signature policy.

Bush urged Trump to reconsider his plan to temporarily ban all Muslim entries into the U.S. While none of the other candidates on stage support the plan, Bush was the only one to lay out a considered and detailed rationale for why the plan was harmful to U.S. interests, saying that it would harm America’s ability to fight terrorism.

“This policy makes it impossible to build the coalitions necessary to take out ISIS,” Bush said, referring to the Islamic State in Iraq and Syria. “I hope you will reconsider.”

Trump, not surprisingly, declined to take Bush up on his offer.

Retired neurosurgeon Ben Carson, who has been a quiet presence throughout the six debates so far, had perhaps his least impactful performance of the primary season. When he did talk, he mostly recited lines from his stump speech, including stories about his mother. And in one of his few interjections, he boasted about The Wall Street Journal’s positive review of his tax policies.

And the only hint of Kentucky Sen. Rand Paul — who was delegated to the undercard debate and refused to show up as a protest — was a group in the audience who for a few seconds chanted “we want Rand.”