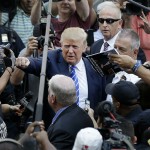 Donald Trump suggested on Monday that the U.S. should consider “closing up” the Internet in order to curb the spread of extremism online.

Speaking at campaign rally at USS Yorktown in South Carolina, Trump called anyone who would criticize his plan because of freedom of speech “foolish people.”

“We’re losing a lot of people because of the internet,” he said said. “We have to see Bill Gates and a lot of different people that really understand what’s happening. We have to talk to them about, maybe in certain areas, closing that internet up in some ways.” Read more at The Verge.