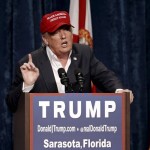 Donald Trump’s campaign decided on Sunday to scrap a scheduled press conference on Monday with the candidate and a group of African-American pastors with whom he is set to meet, the Daily Beast reports.

As previously reported, many of the pastors made clear that it was just a meeting and not an endorsement as the campaign had previously represented.

“On Monday, Mr. Trump will host an informational meet and greet with many members of the Coalition of African American Ministers,” spokesperson Hope Hicks said in a statement on Sunday. “This is not a press event, but a private meeting, after which, a number of attendees are expected to endorse Mr. Trump’s campaign for President. This is closed to press and therefore no media credentials will be provided.”