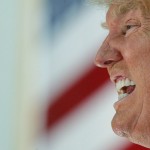 Donald Trump called the newspaper New Hampshire Union-Leader a “pile of garbage” on Monday after it ran an editorial referring to him as “crude” with “no clear political philosophy.”

Speaking at a New Hampshire rally, Trump slammed publisher Joseph McQuaid, who wrote the editorial, calling him a “loser” and Chris “Christie’s lapdog.”

The Republican frontrunner claims that McQuaid asked him to tweet that Christie should be included in one of the prime-time GOP debates.

Trump also mistakenly told the audience to get out and vote on February 8th before the crowd corrected him that the primary was on February 9th. Read more at NBC News.