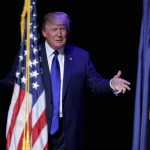 Donald Trump blamed a “young intern” for tweeting a negative comment about Iowa voters on Thursday.

Earlier in the day, Trump’s account favorably re-tweeted a message from user “@mygreenhippo,” which suggested that Ben Carson’s Iowa primary lead is due to “too much Monsanto in the corn creat[ing] issues in the brain?”

Iowa is the nation’s leading corn producer and genetically-modified crops pioneer Monsanto has a substantial presence in the state.

After political watchers wondered whether Trump was wittingly taking a stab at a key primary state’s mental capacity, the candidate took to Twitter with a terse statement: “The young intern who accidentally did a Retweet apologizes.”

The young intern who accidentally did a Retweet apologizes.