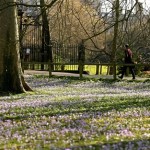 Tri-State residents enjoyed the record-breaking temperatures today, Sunday of Chanukah, when many families got together for Chanukah gatherings, parties and mesibos.

On Shabbos, temperatures climbed to record highs in several areas of the region.

The town of Islip on Long Island appeared to be the area’s hotspot with a record-setting 68 degrees, according to Storm Team 4.

Record highs were also set at LaGuardia Airport, where the thermometer topped out at 66 degrees, JFK Airport at 64 degrees and Bridgeport, Connecticut, at 61 degrees.

Yesterday’s temperatures set records all over New Jersey. Trenton hit a record 68, one degree hotter than the previous record set in 1931. It was a balmy 71 in Atlantic City, also a record.

Monday is expected to be breezy and mild, with showers hitting late in the day, if not earlier, and temperatures reaching 62 degrees. Tuesday temperatures could hit 60.

Wednesday and Thursday highs were expected to hover in the mid 50s, and temperatures could get cooler from there.