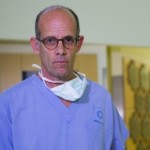 The terrorists who are committing the stabbing attacks that have become all-too-prevalent in recent months seem to be operating in a calculated manner and are aiming their weapons deliberately, intending to kill, Dr. Ofer Merin, head of the Trauma Unit at Shaare Zedek Medical Center in Yerushalayim, tells Israel Hayom.

“The attackers know where they need to hit; it’s not something random,” Merin, who has become a familiar media figure in the past few months given the number of wounded requiring treatment, told a Magen David Adom conference on updates in emergency medicine.

“Three weeks ago, we received a wounded [man] who is still hospitalized with four [stab] wounds: one to the lungs, one to the right atrium, one to the right ventricle, and one to the neck,” Merin said. “It’s as if someone read the manual, and a wounded person comes in with two wounds to the heart. You learn that they [the attackers] know where to strike.”

The wounded man Merin mentioned is still listed in very serious condition and is on a respirator in a medically induced coma in the hospital’s intensive care unit.

Merin told Israel Hayom about one case in which “when [we] checked the bleeding, we were terrified when we saw the knife stuck in the spinal cord, and we scrambled an orthopedist to remove it. The knife was removed in the operating room to prevent uncontrolled bleeding.”