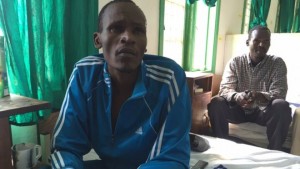 Rescued Tanzanian miners returned to find out their property had been given away because they were presumed dead.

The five gold miners were trapped underground for 41 days after a shaft collapsed while they were trying to rescue 11 other missing colleagues.

One miner said his family had held a funeral for him and his wife had left town, while another said his brother had inherited his shoes.

They survived underground by eating roots, soil, frogs and cockroaches.
Efforts by local people to rescue the miners were abandoned last month after about a week, as hopes of finding them faded.

But faint cries alerted other miners working nearby that the group were still alive and the search resumed.

It is one of the longest periods that miners have remained alive trapped underground.

In Chile, 33 were rescued after 69 days in 2010 in an operation which gained worldwide attention.

Father of four Joseph Burule Robi told the the BBC his family held a funeral for him, and his wife even went back to her own family in Mwanza.

Father of seven Msafiri Gerard said even his shoes had been taken away after he was presumed dead.

“I can’t go to my brother and ask him to bring back the shoes he got as inheritance.

“I was presumed dead, so my family has the right to have my property,” he said.
Tobias Uruothi said that when he received a call to say his brother Onyiwa Kaindo had been found alive he thought it was a scam and hung up.

The miners did not find the 11 colleagues they originally went to look for, and the police presume they are dead.