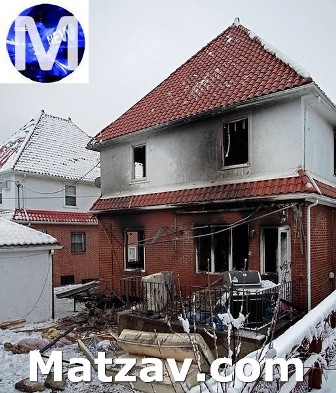 [Multiple videos and photos below.] Brooklyn, NY – The Flatbush community has been plunged into mourning with the news of an awful tragedy, as seven children passed away early Shabbos morning in a fire sparked by a hot plate.

Four boys and three girls – siblings ranging in age from 5 to 16 – were in their bedrooms when the hot plate apparently malfunctioned in the kitchen, starting a fire that swept up from the first floor shortly after midnight, New York Fire Commissioner Daniel Nigro said.

The mother of the children, 45-year-old Mrs. Gayle Sassoon, and her 14-year-old daughter, Avigayil, survived. All are asked to daven for Tziporah bas Gilah and Gilah bas Tziporah, who both jumped from second-floor widows to escape and were treated for burns and smoke inhalation.

“This is an unbelievable tragedy,” Mayor Bill de Blasio said after he toured the burned-out home with fire officials Shabbos afternoon. “It’s so painful. It’s so difficult. Every New Yorker is feeling this pain right now.”

The children’s father was away for Shabbos.

The fire raced from the kitchen up a staircase and toward the bedrooms. A neighbor called 911 shortly after 12:20 a.m., and the firefighters arrived less than four minutes later, but the fire was well advanced.

Firefighters broke down the front door and knocked the flames down to the point where they could go upstairs, but it was too late.

One of the children was pronounced dead at the scene. The other six were sent to hospitals but passed way.

Over 100 firefighters fought the blaze at 3371 Bedford Avenue between Avenues L and M in Flatbush.

“I can’t give them enough credit. They were going through extremely heavy smoke — at times I couldn’t see that house from my house” because of the smoke, Rosenblatt told CNN by phone. “They truly are the bravest.”

Firefighters found no evidence of smoke detectors in the first and second floors, said New York Fire Commissioner Daniel Nigro. There was a working smoke detector in the basement, though it wasn’t clear whether it had activated.

“This is the largest tragedy by fire that the city has had in seven years,” Nigro said during a morning news conference.

The 100 firefighters brought the blaze under control at around 1:30 a.m.

Mayor de Blasio talked about the family’s loss in Brooklyn this afternoon.

“You can only imagine that this beautiful, vibrant family, 24 hours ago intact, and now so many lost and two cling to life,” the mayor said.

Video of Mayor De Blasio at the scene: