[Video below. Levaya info below.] It is with great sadness that we report the passing of two yeshiva bochurim in a crash in Western Connecticut. Eli Schonbrun z”l and Doniel (Dani) King z”l passed away when the van in which they were riding rolled down an embankment along Interstate 84 in Danbury, Connecticut. 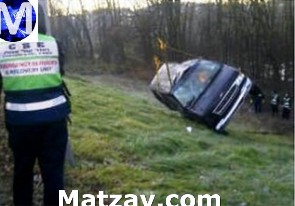 The 1998 Ford Club Wagon, which was carrying nine other bochurim as well, went through a guardrail and rolled down an embankment.

The bochurim were returning to their yeshiva, Yeshiva Ateres Shmuel of Waterbury, which is led by its rosh yeshiva, Rav Ahron Kaufman.

The accident occurred shortly after midnight.

Eli was 16 years old. Doniel was 15. They were both residents of Flatbush, Brooklyn, and both attended elementary school at Yeshiva Tiferes Yisroel of Flatbush.

Click below for video at the scene of the tragic accident: