It is with utter shock and sadness that Matzav.com reports the passing of Yisroel Levin z”l and Elisheva Kaplan a”h, a chosson and kallah recently engaged who were killed in an automobile accident early this morning.

The incident occurred at about 1:40 a.m. when five cars collided in a chain-reaction crash on the Nassau Expressway in Lawrence on the Queens/Long Island border, just outside of Kennedy International Airport in New York. Yisroel and Elisheva were reportedly trapped when their car caught fire during the crash.

Five were injured, and two of those injured are now under arrest as homicide detectives are looking into the possibility that they were driving while intoxicated. 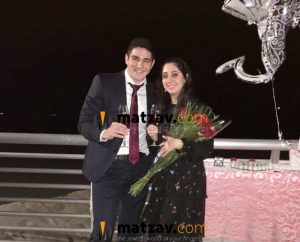 Nassau County Police Department spokesman Detective Lt. Richard LeBrun said that a heavy fog had covered the area at the time of the crash and that the weather conditions could have been a factor in the accident.

Yisroel was a son of Rabbi and Mrs. Shaya Levin of Flatbush. The Levins are noted members of the community, beloved mispallelim of the Mirrer Yeshiva and Agudas Yisroel Snif Zichron Shmuel, and cherished friends of so many.

Yisroel was a brother of Ari (Aryeh) Levin z”l, who tragically passed away at age 26 in January 2016.

Elisheva was a daughter of Mr. and Mrs. Joel and Leah Kaplan of Far Rockaway. Residents of Beach 6th Street, the Kaplans are a noted family of baalei chesed and oskim betzorchei tzibbur in the community. Mr. Kaplan has served his children’s yeshiva, Darchei Torah, in various capacities as executive director, president and board member. He is the executive director of the United Jewish Council of the East Side and the chazzan at Congregation Beth Sholom in Lawrence.

The levayah will be held tomorrow, Thursday, April 5, the fourth day of Chol Hamoed, at 11 a.m., at Yeshiva Darchei Torah, located at 257 Beach 17th Street, off of Seagirt Boulevard, in Far Rockaway.  Elisheva’s kevurah will be held tomorrow at Beth David Cemetery in Elmont, NY, immediately following the levayah. Yisroel’s Aron will be flown on Motzoei Yom Tov to Eretz Yisroel for kevurah there on Sunday, April 8, in Beit Shemesh.