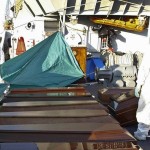 Survivors of Europe’s most deadly migrant shipwreck in years have described the horrifying moment traffickers capsized their boat and left 500 Syrian, Palestinian, Egyptian and Sudanese migrants to drown off Malta on Wednesday.

“After they hit our boat they waited to make sure that it had sunk completely before leaving. They were laughing,” one survivor told the International Organization for Migration (IOM) on Tuesday.

In the incident off Malta, just 10 people survived.

Two Palestinians told IOM their boat had been intentionally sunk by the people smugglers after the migrants refused to change to a smaller, less seaworthy vessel. “A violent argument ensued. The 10 smugglers, said to be Palestinian and Egyptian, began yelling,” the IOM said, citing testimony from survivors in Crete. Those who had managed to jump to safety into the smaller boat were “forced into the water” by their assailants.