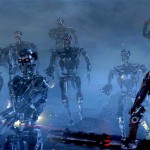 Killer robots programmed to open fire without human control are just a “small step” from the battlefield and military powers should agree to outlaw them, a top United Nations official has said.

Angela Kane, the UN’s high representative for disarmament, said governments should be more open about programs to develop the technology and she favored a preemptive ban before it was too late.

She said: “Any weapon of war is terrible, and if you can launch this without human intervention, I think it’s even worse. It compounds the problem and dehumanises it in a way.

“It becomes a faceless war and I think that’s really terrible and so to my mind I think it should be outlawed. The decision is really in the hands of the states who have the capability to develop them.”

Ms Kane said there was “a great deal of concern” about the prospect of killer robots being developed that would commit war crimes on the battlefield.

There had also been a great deal of reluctance from major military powers to discuss the issue.

Huw Williams, Unmanned Systems Editor at IHS Jane’s International Defence Review, said he knew of no programmes to make killer robots and even the most advanced machines had little ability to act on their own.

He said: “Autonomy at the moment is quite limited. You set the task parameters, give it way points and tell it to go and do x, y and z. Then the machine decides: ‘How do I get from x to y to z in the most efficient manner and get things done?’ But in terms of real thinking, real autonomy, then no.”

While it is theoretically possible that a robot could have sensors and fire when it detected something, he said taking human control away had big disadvantages for commanders.

He said: “Firstly there’s a real loss of control over the battlefield for commanders. Secondly, if a mistake is made there’s a real problem with accountability.”

Read more at The Telegraph.