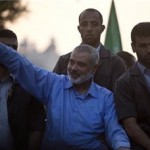 Chief Hamas official Ismail Haniyeh says that the Islamist movement would not hold any direct talks with Israel. There will be “no direct negotiations with the Zionist enemy,” Haniyeh said in a public address in the Gaza Strip, and called on President Mahmoud Abbas to “review” his own strategy of talks with Israel.

Israel denounces Hamas as a “terrorist” organization and refuses to meet with its leaders directly.

Likewise, Hamas does not recognize Israel and opposes Western-backed negotiations between Israel and the Palestinian Authority.

But on Friday, exiled Hamas official Mousa Abu Marzouq — along with Haniyeh one of the movement’s two deputy leaders — said direct talks with Israel might be unavoidable in light of planned negotiations in Cairo to consolidate last month’s tentative Gaza truce.

“If the situation remains as it is now … Hamas could find itself forced to do this,” Abu Marzouq said, referring to the dire humanitarian situation in Gaza after 50 days of Israeli pounding from air, land, and sea, which ended on Aug. 26. The assault left over 2,100 Palestinians dead, most of them civilians.

“From a legal (Islamic) perspective there is nothing wrong with negotiating with the occupation,” he said, indicating it could be necessary in order to guarantee the “rights” of the people of Gaza.

Truce talks are due to resume in Egypt later this month, but Hamas chief Khaled Meshaal has himself ruled out face-to-face dealings with the Israelis.

“Direct negotiations with the Israeli occupier are not on the agenda of Hamas; if negotiations are necessary they must be indirect,” he said after meeting Tunisian President Moncef Marzouki in Tunis.