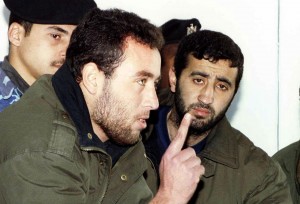 In a pre-dawn airstrike, three top Hamas commanders were killed by an Israeli strike on a four-story building near Rafah in the southern part of the Gaza Strip on Thursday, August 21. The three senior Hamas leaders are responsible for dozens of deadly terrorist attacks including the 2006 kidnapping of Gilad Shalit and the recent Gaza tunnel infiltrations into Israel.

The Shin Bet confirmed that it had targeted two Hamas leaders, Raed Al-Attar and Mohammed Abu Shamaleh early this morning, releasing a statement: “The strike was the result of intelligence and operational activities, which led to the detection and attack on two central operatives from the heart of Hamas’s leadership.” Hamas named the third prominent commander who was killed in the strike as Mohamed Barhoum.

Both men share a long history of carrying out attacks on Israel beginning in the early 90’s when Abu Shameleh was involved in killing an Israeli soldier in Rafah in 1994. That same year, Al-Attar also killed an Israeli soldier on the Egyptian border. In June 2006, Al-Attar planned the Hamas tunnel infiltration near the Kerem Shalom crossing and the abduction of Israeli soldier Gilad Shalit and the killing of two Israeli soldiers. He was one of the Hamas terrorists who held Shalit during the five years of his captivity and was featured prominently in video footage showing the return of Shalit to Israel in 2011. Israel exchanged 1,027 Palestinian terrorists for the release of Gilad Shalit in 2011.

Most recently, Al-Attar, who served as the Hamas commander of the Rafah region in Gaza, was responsible for the abduction and murder of Lt. Hadar Goldin during Operation Protective Edge. According to the Shin Bet, Al-Attar’s Rafah troops perpetrated the deadly attack and were involved in other attacks that wounded IDF soldiers. Al-Attar is also one of the key architects of the construction of cross-border tunnels into Israel.

Abu Shamaleh was most recently involved commanding the infiltration of 13 Hamas men into southern Israel, near Kibbutz Sufa on July 17. The IDF thwarted the attack.

Barhoum, who was considered a lesser commander, had been in a meeting with Abu Shamaleh and Al-Attar when the Israeli strike took place on Thursday morning.

Last week on August 16, Hamas’s military wing the Izz ad-Din Al-Qassam Brigades, released a message on their Twitter account stating that “We are continuing our struggle. Allah is our goal. The prophet is our leader, Jihad is our way, and death for Allah is our most exalted wish.”