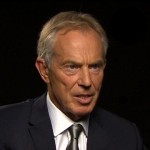 Tony Blair has finally said sorry for the Iraq War – and admitted he could be partly to blame for the rise of Islamic State.

The extraordinary confession by the former Prime Minister comes after 12 years in which he refused to apologize for the conflict.

Blair made his dramatic ‘mea culpa’ during a TV interview about his and George Bush’s decision to oust Saddam Hussein.

In the exchange, Blair repeatedly says sorry for his conduct and even refers to claims that the invasion was a war ‘crime’ – while denying he committed one.
Blair is asked bluntly in the CNN interview, to be broadcast today: ‘Was the Iraq War a mistake?’

He replies: ‘I apologize for the fact that the intelligence we received was wrong.

‘I also apologize for some of the mistakes in planning and, certainly, our mistake in our understanding of what would happen once you removed the regime.’

Challenged that the Iraq War was ‘the principal cause’ of the rise of Islamic State, he said: ‘I think there are elements of truth in that.

‘Of course you can’t say those of us who removed Saddam in 2003 bear no responsibility for the situation in 2015.’

In the ‘trial by TV’, US political broadcaster Fareed Zakaria accuses him of being President Bush’s ‘poodle’ over the conflict. Blair’s confession comes a week after The Mail on Sunday published a bombshell White House memo revealing for the first time how Blair and Bush agreed a ‘deal in blood’ a year before the invasion.

A 2002 briefing note from US Secretary of State Colin Powell to the President showed Blair had secretly pledged to back the conflict – while telling MPs and British voters that he was seeking a diplomatic solution.

In his CNN interview, Blair candidly asks for forgiveness for his blunder in not realising ‘what would happen once you removed the regime’.

The admission makes a mockery of the statement in the Powell memo that Blair would ‘demonstrate [to Bush] that we have thought through “the day after” ’ – a reference to the consequences of invasion.

Read more at THE DAILY MAIL.