Yerushalayim in the late 1930s. The world of the old yishuv and the storied inhabitants of the Holy City who filled Yerushalayim with kedushah and learned Torah amidst abject poverty.

In to this rarefied atmosphere a child is born to one of the most outstanding talmidei chachomim of the era, a yungerman named Rav Shlomo Zalman Auerbach, who would go on to become acknowledged as a gadol hador. There is little to eat in the house and there are already a number of children in the small home. But there is warmth and happiness in abundance and the ruach of hasmadah in Torah permeates the very walls. 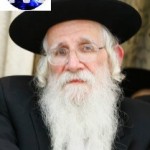 The child is named Ezriel and he proves to be a worthy link in the illustrious chain of the Auerbach family. He excels in cheder and goes on to become one of the shining stars of Yeshivas Slabodka and Yeshivas Mir. He marries a daughter of the renowned posek, Rav Yosef Sholom Elyashiv, a granddaughter of the legendary tzaddik of Yerushalyim, Rav Aryeh Levin, and immerses himself in the world of ps’ak halacha. Until his father’s petirah, he was one of the few who were constantly involved with the flow of knotty shailos that arrived daily in Rav Shlomo Zalman’s mailbox. And for more than fifty years, the quiet and unassuming Yerushalmi gaon Rav Ezriel has worked hand-in-hand with his father-in-law, Rav Elyashiv, clarifying the halacha in every area of Shulchan Aruch.

Throughout the years, Rav Elyashiv would spend Chol Hamoed of Sukkos and Pesach with Rav Ezriel and his rebbetzin, and join them each year for the Purim seudah. During the summer, they would travel together to Ashdod, where the two gaonim would learn together near the sea.

Rav Ezriel is looked up to as one of the leading poskim in Eretz Yisroel and has trained many poskim who provide hora’ah to bnei Torah communities in Yerushalayim, Beit Shemesh, Beitar, Rechasim, Elad and more. He is the mara d’asra of the prestigious Bais Medrash Chanichei Hayeshivos of Bayit Vegan and is much sought after to decide halachic issues all over the country.

His devotion to Yidden in need comes before all else and he established and heads the Va’ad Harabbonim L’inyonei Tzedakah, which has helped countless widows and orphans, the sick, the infirm, and the severely indigent.

Rav Auerbach has been the featured speaker at many Lev L’Achim rallies geared toward signing up ever more volunteer yungeleit to give a night each week to knock on doors and learn with those less fortunate Jews who have never before tasted the sweetness of Torah. And each year, at the annual Lev L’Achim asifa in Bnai Brak, Rav Ezriel serves as the shliach of Rav Elyashiv to deliver his bracha to the assemblage.

The major day-to-day Lev L’Achim shailos in Yerushalayim are brought to Rav Ezriel, and he has been the patient yet firm posek who has convinced mosdos to take in the children of Project Rishum even though their parents may not yet conform with the standards the school would like. Indeed, when it became evident that there was a distinct lack of schools available for teenage girls of the Rishum, it was Rav Auerbach together with Rav Yisroel Gans of Matersdorf who stood behind the opening of Pninas Hachinuch, the highly acclaimed high school whose advanced academic level and focus on inculcating the basics of Yiddishkeit have transformed hundreds of girls and in turn their entire families.

This past Chol Hamoed Pesach, a delegation from the Lev L’Achim hanhalah visited Rav Ezriel in his home to personally invite him to the annual asifa in Bnei Brak. At that time, they presented Rav Auerbach with a copy of the newly released sefer Mitchazkim BaTorah. At first glance, it appears similar to the collection of chiddushei Torah published by many kollelim and yeshivos gedolos. However, when one scans the index and sees the names of those who have authored these complex shticklach Torah, the truth about this sefer becomes apparent. The outstanding yungeleit and bochurim have names such as Guy, Nir, Eren, Liat, Asaf, Amiram and Yakir. And next to their names and the yeshivos they currently attend, there appear the names of their former schools, such as Tichon Begin in Rosh HaAyin, Makif Gimmel in Beer Sheva, Ben Gurion University, and other bastions of secular education.

All of these novel Torah essays were penned by “Mitchazkim,” boys who were recruited by Lev L’Achim while attending secular high schools yet took to Torah with such enthusiasm as to have advanced to being bona fide yeshiva bochurim within just a few years.

As he scanned the various chiddushei Torah, Rav Ezriel’s face grew pensive. After a while, he turned to his visitors and declared with emotion, “Rabbosai, I have been trying to fulfill the mitzvah of simchas Yom Tov this Pesach, but it hasn’t worked. I lost my wife a”h this year and this is the first Chol Hamoed in many decades that I am not hosting my father-in-law, Rav Elyashiv. Each day I drink the requisite reviis of wine and eat the bit of meat that Chazal say one must consume to fulfill the mitzvah of simchas Yom Tov. Yet, my spirit has not lifted…until I saw this sefer! It is my zechus to be part of Lev L’Achim and to have a portion in such a kiddush sheim Shomayim.

On Wednesday evening, 18 Tammuz/July 20, the Lakewood Torah community will have the rare privilege to see and hear Rav Ezriel Auerbach live via satellite transmission from Bnei Brak. He will be joining his brother-in-law, Rav Chaim Kanievsky, for a question-and-answer session revolving around the shailos submitted by Lev L’Achim personnel. During the course of their avodas hakodesh, these bnei Torah encounter many situations that require delicate halachic decisions. The bulk of these queries are directed toward Rav Yitzchok Zilberstein, the mara d’asra of Ramat Elchanan and author of numerous popular seforim such as Tuvcha Yabiu and Borchi Nafshi. Rav Zilberstein will present a number of these shailos to Rav Chaim, and together, the three illustrious brothers-in-law – all are sons-in-law of Rav Elyashiv – will discuss halacha lemaaseh, the p’sak that will be issued to the Lev L’Achim people in the field.

The very fact that Rav Chaim Kanievsky has once again allowed Lev L’Achim to bring a video crew to his home and set up a satellite truck outside his front door in order to broadcast this singular session speaks volumes about how the gedolei Yisroel appreciate the work of Lev L’Achim. They are ready to step beyond their usual bounds to help ensure that the movement bringing all of Eretz Yisroel back to Torah is able to continue its vital work. This is why Rav Shteinman made his first historic visit to Lakewood in 1998 and why luminaries such as Rav Michel Yehudah Lefkowitz zt”l and ybl”c Rav Elyashiv, Rav Nissim Karelitz and Rav Chaim Kanievsky have appeared live via satellite transmission before the annual mass asifa in Lakewood.

The tens of thousands of children who are learning in Torah schools today as a result of the Lev L’Achim Project Rishum drives are the ultimate proof of why the gedolei Yisroel are so united behind P’eylim / Lev L’Achim. Hopefully, this year’s campaign will enable Lev L’Achim to continue reaching the masses and changing the face of Eretz Yisroel.