The new album comes thirty-eight years after the release of MBD’s first record.

MBD was born on April 16, 1951, to Chazzan and Mrs. David Werdyger. Chazzan Werdyger, originally from Cracow, was one of the “Schindler Jews” and miraculously survived the Nazi inferno during the Holocaust. 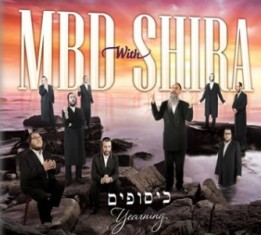 The sixty-year-old singer has produced dozens of Jewish music albums over the past 40 years and continues to reside in Sea Gate, Brooklyn, where he records much of his music at his own personal studio. In addition to his inspiring singing, MBD is a talented composer, having authored dozens of big hits over the years.

MBD has related that he first began singing at the urging of his father, Rav David Werdyger, who, after hearing a composition of his, told him to make an album. In 1973, he released his first album, Original Chassidic Niggunim.

He said, interestingly, that he thought he would ‘chalish‘ (pass out) the first time he got up to sing in public.

“The pachad was awesome,” said MBD.

MBD apparently got over that fear, heralding in a new age of Yiddishe music. His last album, titled Kulam Ahuvim, was released in February of 2009.