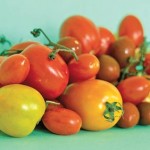 Tomato prices are zooming up again, and the marketers are accusing the Ministries of Agriculture and Finance of not taking advance measures to approve customs duties-free tomato imports. A kilo of tomatoes cost NIS 10.50-11 on the wholesale market today, a 19.3% increase.

Some of the retail chains continued selling tomatoes at a loss, while in the open markets, the price of tomatoes soared again. It was learned that hundreds of tons of tomatoes had not been released from the ports, due to the absence of a customs duties exemption. Shafit (1991) Rechovot, for example, has 160 tons of tomatoes in Haifa Port. According to Shafit CEO and co-owner David Hamuel, “We have eight containers with 160 tons of tomatoes in Haifa Port, and the march of folly continues. There is a tremendous shortage. Yesterday, for the first time in 22 years, I didn’t distribute tomatoes to the endpoints. The IDF bases to which I supply tomatoes did not receive them, and the same is true of hotels and hospitals, just because of bureaucracy. Instead of the Ministries of Finance and Agriculture preparing in time, so that there would be new quotas on January 1, it’s stuck now between the Ministry of Finance and the Ministry of Agriculture.”

“Globes”: When do the quotas expire?

Hamuel: “Theoretically, the quotas were valid until November 20, 2015, but the Ministry of Agriculture stated that it wouldn’t leave containers in the sea, even if the quotas were finished, and according to the situation, it looked the other way, and allowed tomato imports to proceed. There was no clear policy. Now everyone is waiting, even though it could have been solved long ago. The ministries have created a fog of battle.”

The current spurt in the price of tomatoes comes four months after the price hit a peak of NIS 20 a kilo. Opening the market to customs duties-free tomato imports managed to temporarily restrain the price of tomatoes. The crisis on that occasion resulted from a virus that afflicted many tomato crops, and from farmers not growing tomatoes because of the low price of tomatoes in previous years. The ongoing supply problem in the market has not been solved, and the prices are therefore skyrocketing now. At the same time, prices of peppers and eggplants are also shooting up. Red peppers are being sold on the wholesale market at NIS 9-9.50 a kilo today, a 20% jump in one week. Eggplant prices have zoomed 28% in one week to NIS 7.40-7.80 a kilo.

“Following the transition to a free market and the Ministry of Agriculture’s desire to lower consumer prices, the Ministry of Agriculture is unable to plan and control the quantity planted and the price, and the market has become volatile as a result of independent variable, such as the weather and the area planted, which depends solely on the grower (this is reflected in the price within a range of up to NIS 3 in an ordinary year).

“Nevertheless, the Ministry of Agriculture is continually monitoring the regular supply of the tomato market and fresh produce to consumers, and is assessing the situation frequently. At the same time, the shortage in the domestic market is being supplemented with imports from Jordan, Turkey, and Europe.

“Today, Jordan is the main source of tomato imports, given its geographic proximity, providing an immediate answer for occasional shortages. At the same time, given the fact that 80% of the amounts have been barred recently because of pests in shipments, imports from Jordan have been rather small.

“It should be emphasized that meanwhile, owners of import licenses (valid as of December 31, 2015), can bring in their goods until January 14, 2016, following the administrative extension they received.”

No response from the Ministry of Agriculture has been available so far.