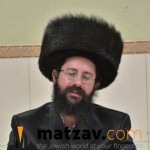 A Shabbos hisachdus for supporters of Mosdos Tolna was held this past Shabbos, Parshas Shemos, together with the Tolna Rebbe.

The Shabbos program was held at a hotel in Yeruchum.

This seven-year Shabbos tradition raised funds for Tolna among those who participated, including real estate entrepreneur Yisroel Tzishinsky, CEO of Chemdas Haaretz, who during the Shabbos morning seudah led the fundraising of a million and a half shekels for the institutions of Tolna.

The supporters of the Chassidus at the Shabbos hisachdus donated the funds for the benefit of the building fund of the Tolna mosdos, and within half an hour, large amounts were pledged, totaling a million and a half shekels.

On 7 Shevat, the Tolna Chassidus will celebrate the cornerstone laying of a new Tolna campus inb Ashdod, with the participation of the Skverer Rebbe, who will be visiting Eretz Yisroel shortly for the first time in many years.