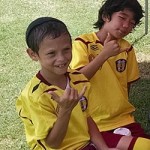 Yudi Weinbaum is passionate about many things—chief among them, Judaism, with soccer trailing behind as a close second.

So he really took it to heart when his normally cheerful son, Yossi, came home from a recent soccer match almost in tears.

“I don’t know what happened,” said the 9-year-old, who is home-schooled and takes classes at Chabad of Hawaii in Honolulu. “Before we began playing, the referee saw my tzitzis hanging out of my shirt and told me I couldn’t play unless I took them off or cut off the strings.”

The referee claimed that the tzitzis somehow broke the ban on wearing extra sporting equipment to the game.

Unsure of how to proceed, Yossi—who had been playing soccer since he was 6 and had never encountered a problem like this before—took the advice of his coach to tuck in his tzitzis and get back on the field, joining his teammates on “Hawaii 808.” Within minutes, he scored a goal, and things appeared to be back to normal.

It took until the second half before the referee noticed his yarmulka and ordered him to remove it or leave the game. So Yossi walked off the field, knowing that was non-negotiable.

“This was something that had never happened before,” says coach Tye Yamada, who had been coaching children’s soccer for five years. “Yossi is one of our most reliable offensive players, and we’ve never had any issues. Boys should not have to sit out of games for reasons of religion.”

Weinbaum comforted his son, assuring him that he had done the right thing. It was the day before Sukkos, so after the Yom Tov ended, he and his wife, Estee, set about to address the issue.

“We suspected that this was either the result of ignorance or anti-Semitism, and we wanted to clear the air as fast as we could,” says Weinbaum, a London native who runs Hawaii’s only kosher-catering business, Oahu Kosher. “I immediately wrote an email to the coach asking him to look into it.”

In the past, they say, Yamada and his co-coach, Michael Lancet, had always been supportive of Yossi missing practice and games, for example, when it coincided with Shabbos or Yom Tov.

Within days, the family was gratified to learn that the incident was the result of unawareness on the part of the individual referee, and they were assured that it would not happen again.

“Please let your son know that we wholeheartedly support him, in his religious convictions and his wearing of religious attire at soccer games,” wrote Phil Neddo, Oahu League President. “Furthermore, we have asked the State Referee Committee about measures by which referees can be made more aware of the allowances of non-dangerous religious attire, more alert to situations where a player might fall under that rule, and as sensitive as possible to the diverse backgrounds and religions of all participants.”

After receiving an equally sincere letter from the offending referee, who said he honestly did not know what tzitzis were, the Weinbaums say they felt confident enough to send Yossi back onto the field.

“Soccer is a great unifier, bringing together people from different cultures and backgrounds,” says Weinbaum, himself a long-time fan of the Liverpool F.C. (Football Club). “It was so refreshing that this unpleasant incident served to open more doors and educate others about the Jewish people, and our unique faith and traditions.”

As for Yamada, he adds that he’s grateful that Yossi is again with the team, dribbling and dragging the ball towards the goal: “He is one of our strongest, most fearless players, and it’s good to have him back.”