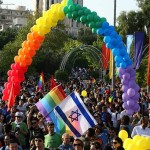 The toeivah pride parade in Yerushalayim ended this evening without incident. An estimated 4,000 people took part in the parade, which started from Liberty Bell Park and continued up Rechov Dovid Hamelech to Independence Park, where an evening rally capped off the event. The streets in the area were closed to traffic. Over 1,500 police officers, under the command of Yerushalayim Police Chief Cmdr. Aharon Franco, were on the streets to prevent any altercations or violence. A group of right-wing activists, led by Baruch Marzel, held a small demonstration against the march, which they termed the ‘Abomination Parade,’ at Paris Square.There were no clashes, but one man was arrested for throwing an egg in the direction of parade participants.

Meanwhile, an anti-toeivah pride demonstration was held in Meah She’arim and police closed off Kikar Shabbos in Geulah to traffic.

This year, the charedi community decided to avoid public protests in order not to give the event additional publicity. However, the gedolim reiterated that the parade is an abomination and an anathema to Torah values and the kedushah of Yerushalayim.

Interestingly, a poll found that two-thirds of Yerushalayim residents – even non-religious ones – were opposed to holding such an event in the city.

The Eida Hachareidis stated that it would refrain from demonstrating against the parade.

“What do we want to give a few people publicity for?” asked Reb Yoel Kraus of the Eidah “We made our point two years ago by getting the international toeivah parade in Yerushalayim canceled.”

Not surprisingly, the small Conservative and Reform Jewish movements in Yerushalayim voiced their support for the event.